It's a Paleo Science Friday at Little Green Pouch

Don’t you love that “Why? Why? Why?” stage kids go through?

In asking “Why?” we found some pretty fascinating science behind “going all ancient school” on diet, à la Paleo. And it might influence what you decide to put in your Little Green Pouches.

So why consider Paleo? Lots of reasons. But high on the list: avoiding damaging lectins in foods (specifically, prolamins and agglutinins).

Lectin proteins in our own bodies actually serve several protective functions. Lectins from other sources, however—wheat, milk, legumes (including peanuts) and other foods—can damage the intestines and (through a couple of different mechanisms) get into the bloodstream and cause inflammation or confuse the body into attacking its own tissues. Yikes!

So we did some research and talked to a couple of Paleo friends about the lectin story, and here’s the simplified, non-techie version...

How could the body get so confused about itself?

The body sees lectins as foreign-invader proteins and makes antibodies to serve as messengers to tell the immune system, “This protein’s dangerous. When you see too much of this protein around go on the attack until the threat is neutralized. Then, clean up from the battle.”

This is the basic story of what happens when your immune system reacts to a bacterial or viral infection.

But it turns out that some lectin proteins from foods look quite a bit like some proteins in our own bodies (molecular mimicry). And there are a couple of ways that the body’s system for profiling threats can turn into a case of mistaken identity, confusing Self with Other.

In some cases, as antibodies relay messages about potential threats through the body, they alter the Danger message just a little bit, so they appear even more similar to our own body’s proteins than they appeared before.

Just changing “a letter or two” in the immune-system message can make a big difference in how the immune system acts. That’s when breakfast cereal can turn into a serious health risk… 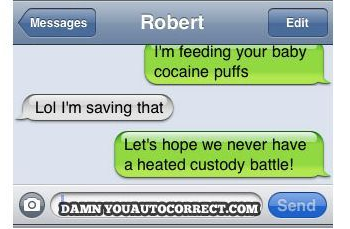 Well, they’re similar, but chances are it was one or the other. However, to make sure the perpetrator doesn’t slip through the cracks, the police put out an alert saying, “The guy was wearing an orange or red hat.”

So now, the Danger message has gotten more broad, and innocent bystanders cells might get tagged as suspects because of their wardrobe choices.

Lectins settle down in different parts of the body, create household friction (stickiness and inflammation), and get Cheetos dust on everything in the vicinity. When the immune system decides it’s time to clean the living room, it concludes, “This is too messy to spot clean. I’m just going to toss out everything with Cheetos dust on it.” So along with the Cheetos, out go a few pancreas cells (type 1 diabetes) or knee joint cells (rheumatoid arthritis), for example, on the way to autoimmune disease.

Lectins (and bacterial proteins that can piggy-back on them into the bloodstream), can cause chronic inflammation in the body, which can make us more vulnerable to illness and disease. For our immune systems, chronic inflammation is kind of like running a virus scan on your computer 24/7. It saps your processing power and slows down your internet browser SO MUCH that it’s not even fun to be on Pinterest (Melissa…).

Are all lectins risky for everyone?

Certain kinds of food lectins may be. But other kinds of lectins actually occur naturally in our bodies. It depends on whom you ask, and researchers haven’t found all the answers yet. We do know some people are definitely more susceptible to some food lectins than others. Some people are more sensitive to specific foods: wheat but not dairy, tomatoes but not potatoes. Plus chronic, long-term exposure (pizza every day) or an episode of intense exposure (2 pizzas today) can make a difference.

Ultimately, each person’s dietary needs are unique. But when it comes to lectins, at the very least you might want to put them on your “watch list” for troubleshooting health problems using diet.

And with that, we conclude our Paleo Science Friday at Little Green Pouch! ;)

We hope you keep asking “Why?” as you make decisions about the right healthful foods to prepare for your family!


P.S. For some Science Friday #amazing, here’s a pretty incredible video of an immune system “neutrophil” hunting down bacteria.

Are all lectins bad? (and what are lectins, anyway?), from The Paleo Mom blogger Sarah Ballantyne, author of The Paleo Approach: Reverse Autoimmune Disease and Heal Your Body

Interview with Loren Cordain, Ph.D and author of The Paleo Diet.

Why no grains and Legumes? Part 1: Lectins, from Paleo Plan

You need targeted traffic to your Why go Paleo? Little Green Pouch looks into lectins | Little Green Pouch website so why not try some for free? There is a VERY POWERFUL and POPULAR company out there who now lets you try their website traffic service for 7 days free of charge. I am so glad they opened their traffic system back up to the public! Sign up before it is too late: http://marshmallow-digital.com/cz/bfsu